I was thinking recently and reflecting about a passage in John 6 that I hadn’t really paid much attention to before and how it can relate to us today.

Our pastor is a very thorough expositor of the Bible, so I often notice things I had missed before.

We know the story of the feeding of the 5,000 and then of Jesus walking on water. We don’t always pay close attention to the key event that happened after that. At least, I hadn’t paid that much attention to it until recently.

“Jesus said to them, ‘I am the bread of life; whoever comes to me shall not hunger, and whoever believes in me shall never thirst. But I said to you that you have seen me and yet do not believe. All that the Father gives me will come to me, and whoever comes to me I will never cast out. For I have come down from heaven, not to do my own will but the will of him who sent me. And this is the will of Him who sent me, that I should lose nothing of all that he has given me, but raise it up on the last day. For this is the will of my Father, that everyone who looks on the Son and believes in him should have eternal life, and I will raise him up on the last day.” – John 6:35-40

Here’s the crazy part: after those miracles and after Jesus tells them He is God, people who had followed Him before started to leave.

I’m not sure what they had in mind, but evidently it was not hungering and thirsting after the Son of God.

“So the Jews grumbled about him, because He said, ‘I am the bread that came down from heaven.’” -John 6:41

They didn’t like what He had to say. Jesus knew their hearts and minds, and He had told them earlier that they had been looking for Him because they ate of the loaves. (6:26)

Here is the key sobering verse: “After this many of his disciples turned back and no longer walked with him.” (John 6:66) 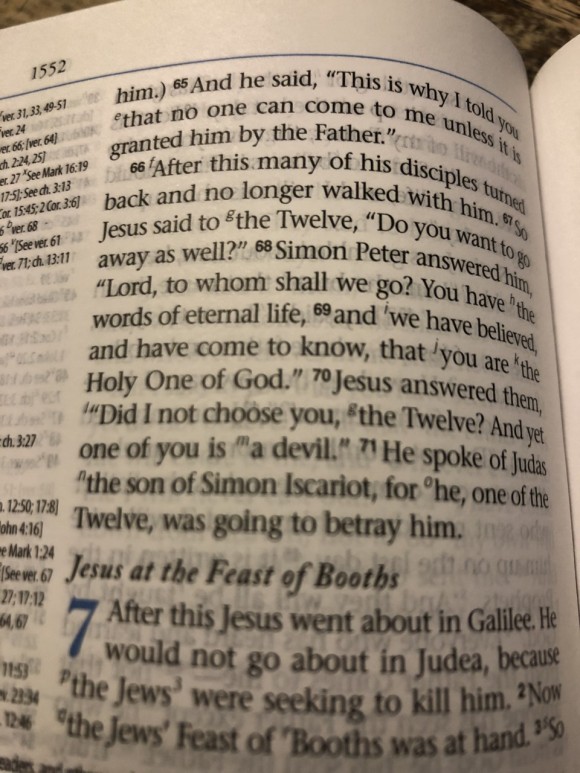 I don’t know exactly what people were looking for at the time. Maybe they wanted a political leader. Maybe they were tired of being ruled by Rome.

The Pharisees were afraid that the popularity and miracles of Jesus would cause a Jewish uprising, thereby resulting in the Romans stripping them of their rights and country. (John 11:48) The high priest Caiaphas actually suggested killing Jesus to avoid having the Romans crack down on the Jews. (John 11:49-50) Their decision to try to kill Jesus came after Jesus had raised Lazarus from the dead. They were concerned about politics literally after Jesus had raised someone from the dead. They were completely missing the most important thing!

People were concerned about their rights and about their country back then also. Only they had bigger problems than we do in the West in 2020.

Maybe they were tired of their freedoms being trampled, and they read in the Old Testament how God had prepared a land just for them, and they longed for their own country to be as it was in the Solomon era.

Either way, Jesus had something much deeper, much more valuable for them than what they had in mind. He didn’t come to offer physical healing or to eradicate poverty, although he did plenty of that while on earth. He didn’t come to bring freedom from Rome.

He came to offer freedom from sin.

Discussing forgiveness of sins and talk about Christ is not very interesting to many people today. I think people often miss the deeper, more valuable things going on around them.

People are getting distracted by the things of the world all the time. It’s important to remember that the road to heaven is narrow, and can only be entered through Christ.

Many will lead their entire lives missing that point, despite spending so much time and resources on other distractions.

Today, I think that the value of “activism” and political engagement can vary by person to person. Some people aren’t very political, while others are.

Since we live in a constitutional republic in which our representatives obtain their authority from the consent of the governed, it is the responsibility of all of us to pay attention to the issues, to have conversations among ourselves, and to vote.

So the amount of time someone spends on issues such as freedom, helping the oppressed, or other topics can vary.

However, none of these topics should supersede what really matters the most and that will have eternal value.

Try to avoid a legacy similar to those “disciples” in John 6:66. They completely missed the point and didn’t care about what mattered the most.